I spent the weekend at Eternal Extravaganza 2 at Tales of Adventure Comics and Games in Coopersburg, PA. Over the course of Saturday I snapped some photos of the Volkan Baga inspired Mox Jet I was working on. Now I'm home, so I thought I'd throw everything together in an easy to view .gif. Enjoy! 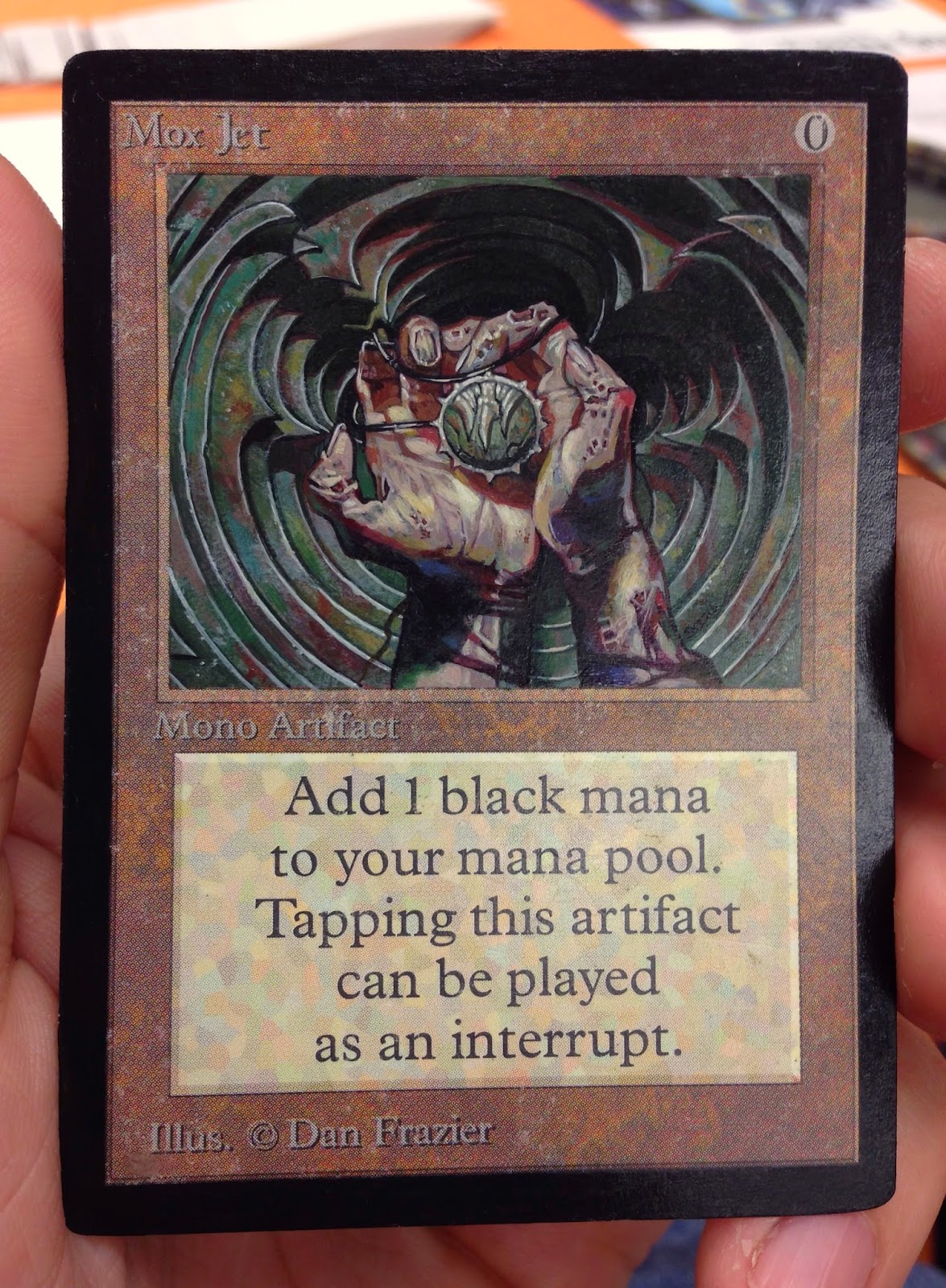 Rescuing a 21 Year-Old Piece of Cardboard

You haven't lived until you've taken sandpaper to an Alpha dual.

I had just that privilege this week, as I dove head first into another restoration project. A lot of the cards I work on aren't in the greatest shape, but I don't actually do a ton of fix-it jobs on alters gone wrong. Luckily the Jace I worked on several months ago taught me a few things about removing caked on paint without damaging the underlying card.

As before, I don't feel comfortable showing the full card in its original state. Someone put some amount of time into painting it, and I know as well as anyone that there's a learning curve when it comes to painting and alters (I myself have learned a ton over the past six years). That said, here's a crop of the card when I received it from the client:

The spot underneath the title was a quick attempt by me to see how easily the paint would come off. I was happy to learn it wasn't too bad at all. Using a variety of tools eventually I discovered the card underneath: 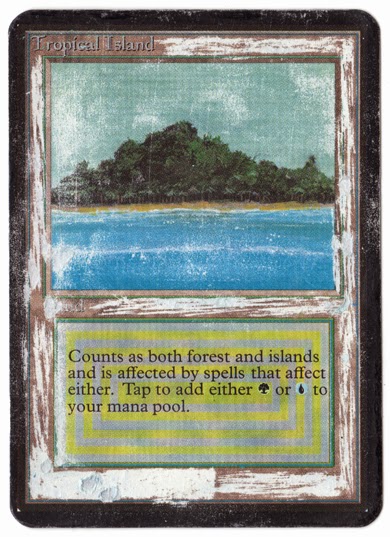 The scrapes didn't occur in removing any paint. Those were there originally. The previous alter was either trying to cover that damage, or a crude attempt by the artist to have a blank canvas to work on. I'll just say this: I don't recommend erasing, acetone'ing, or scraping cards before painting on them. You can save a lot of time and accidental damage by simply painting on a grey base-coat (a primer if you will) from the same black and white acrylic you use to do normal painting with.
These restoration jobs add a new dimension of fun to my work: discovering the hidden card underneath all that paint and finding creative ways to fix the damage. Once the paint was removed, I had the task of preparing the surface for its new paint job. Because some of the outer layer had been stripped away I need to repair areas of nothing but exposed paper. That meant priming first and carefully sanding down the surface with super fine, 600 and 1500 grit sandpaper. The end result was far from ideal, but it was manageable.

The told the client right off the bat that restoring the card to something that resembled an unaltered card was likely impossible. We settled for a simple extension, keeping those lovely two-tone Alpha borders, which I also touched up to keep everything looking fresh. The end result is clean and elegant, two adjectives I always keep in mind when working any project: 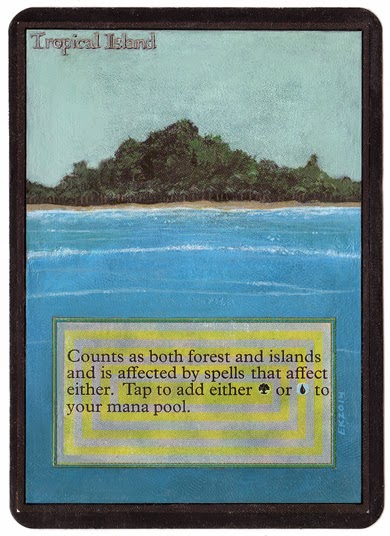 I first became familiar with the work of Hieronymus Bosch in a high school European History class. The professor loved this 15th century, Netherlandish painter, and I too was immediately drawn to the intricate, methodical nature of his work. You could say Bosch sits among the pantheon of artists that are always stirring in the back of my brain. I went on to name my pet chameleon simply, Hiero. And just last year I finally got to see a Bosch up close; his most famous work, The Garden of Earthly Delights, at the Museo del Prado in Madrid. The piece is actually a triptych depicting Adam and Eve's paradise on the left, a myriad of nude figures and mythical creatures in the central panel, and a hellish landscape on the right.

Needless to say when a client asked to replicate a Bosch onto a card I was excited to take on such a challenge. As Bosch's works are endlessly detailed I immediately knew that I could only accomplish a small section of one of his paintings on my 63x88mm canvas. And as Bosch's rendition of Hell is particularly freakish, I knew that had to be my choice. So without further adieu, here's the bottom right section from Bosch's The Garden of Earthly Delights. 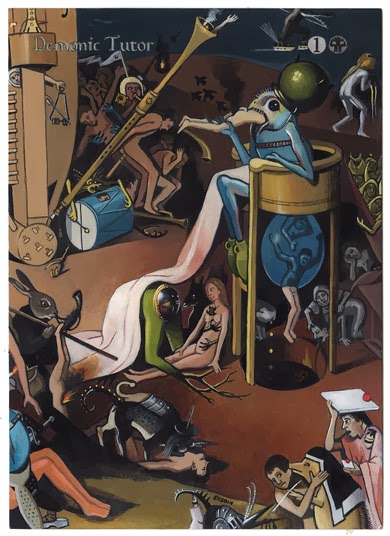 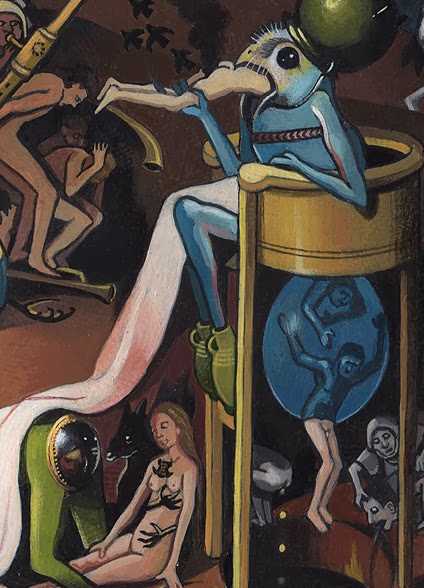 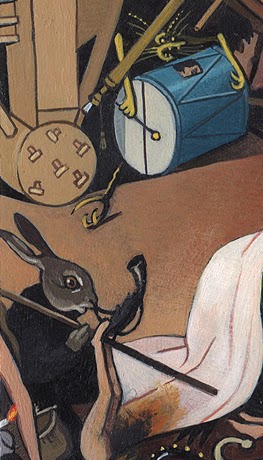 Altering is most often about adding something to a card to make it special and unique. Ever so often, it's about saving a card on its last legs.

About a month ago I was presented with perhaps my most extensive and difficult restoration project to date. The card in question: an original foil Jace, the Mind Sculptor. The card was in awful shape. It had been altered previously, perhaps to hide other damage (neither I, nor the owner have the full story). The paint job was done very poorly, acrylic caked on like frosting and covering most of the foil as well. There were some dings visible along the sides and back. The condition was so horrible, the owner didn't bat an eye when I asked if I could gently scratch the surface to see if any of the paint would come off. I didn't have any delicate tools on hand, so I ever so gently rubbed it with my house key. A chip came off without damaging the card further. I was hopeful something could be done, with the caveat that there was no bringing this card back to pack fresh quality.

I feel a little uncomfortable showing the full card in it's original state. After all, this is someones alter job and for all I know they were proud of the result. That said, here's a small crop: 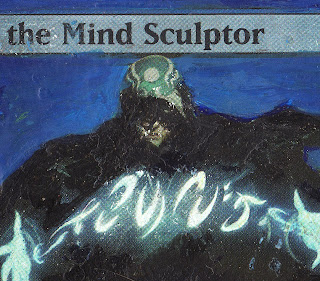 And here we have the card after most of the paint was removed. I quickly discovered that the card had also been acetoned to some extent. 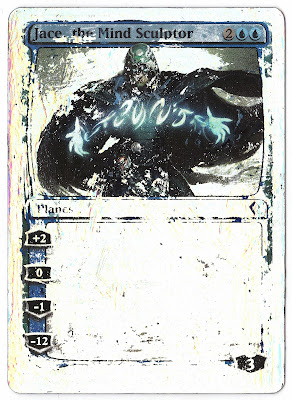 At first I wasn't sure how to approach this mess I found under all that paint. Eventually I settled on simply restoring the Jace and some of the frame. I didn't want to cover all the foil, as the previous alteration had done, so I cleaned it up as best I could, removing stray remnants of printing with, sorry to say, a little acetone of my own.

Ultimately it felt like the greater good. I hope Jace can put this all behind him and seek out a better life that I'm sure awaits in his future. 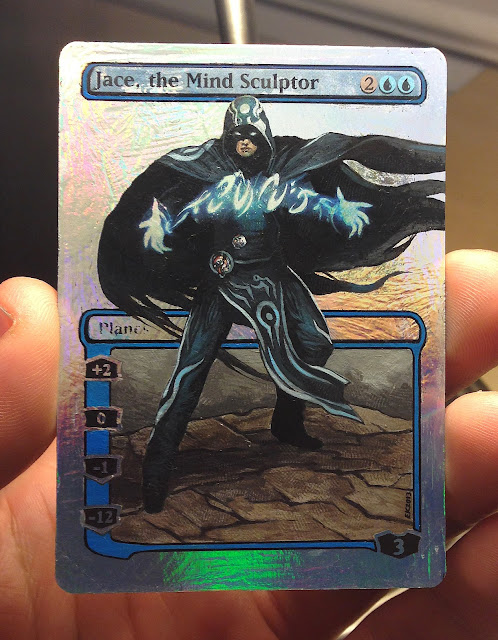 My Nouveau Moxes appeared on this blog earlier in the year. I shared the Nouveau Lotus via a GatheringMagic article just two short months ago. And now, with an Ancestral Recall, Timetwister, and Time Walk finished over the past two weeks, the full set is finally complete. A lot of hours of planning, priming, and painting, and we're here. 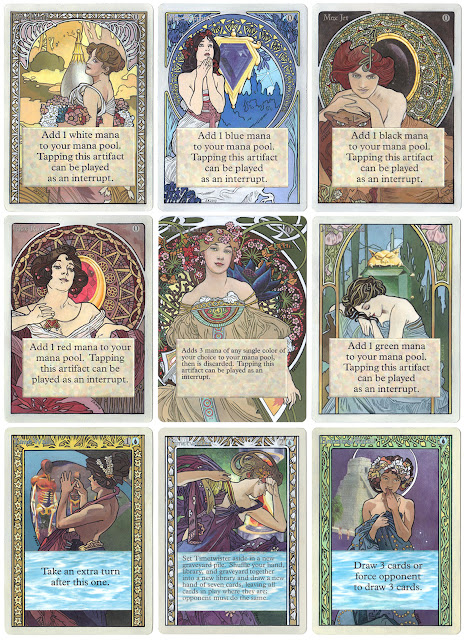 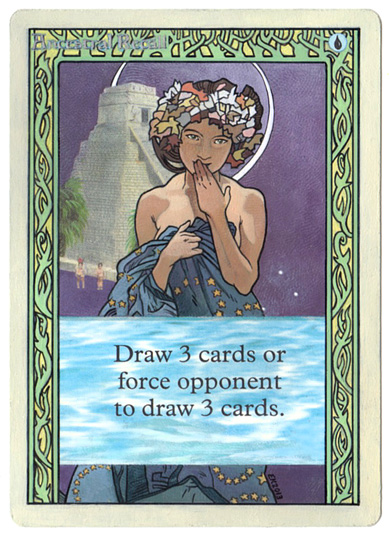 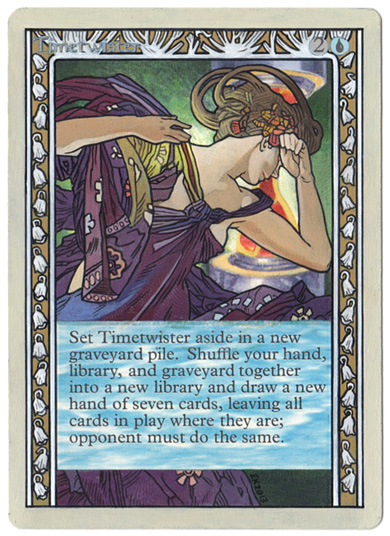 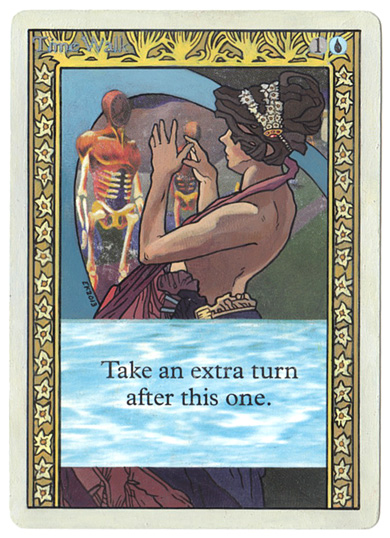 I hope you enjoyed! As always, see more work every week posted to my Facebook. The link to which is located on the right side of this blog.

No, The Other Madonna


The past couple of days have seen me working on two different takes on the classical image of Madonna and Child. The latest one is based off Fra Filippo Lippi's Madonna and Child with Angels, circa 1455. One of the older inspirations for a piece, and one of the most detailed. Let's get to it! 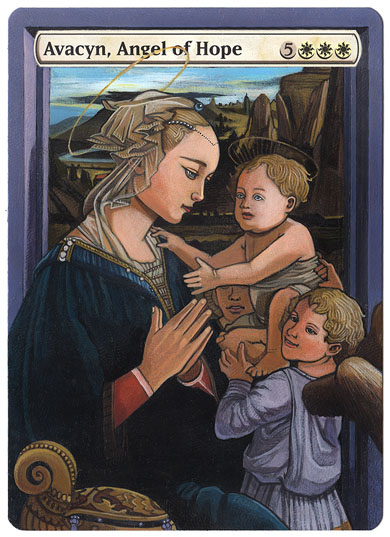 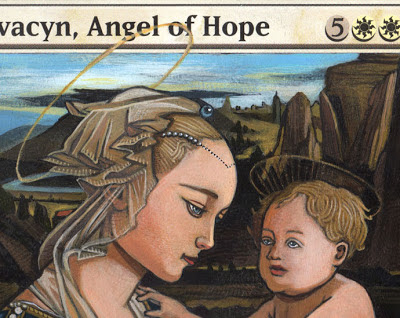 Click image for larger view.
Posted by klugless at 9:50 AM

You'll notice by first set of altered Moxes above in the header, modeled after Terese Niesen's famous Guru lands. And today, I get to unveil my second, lending tribute to Alphonse Mucha. 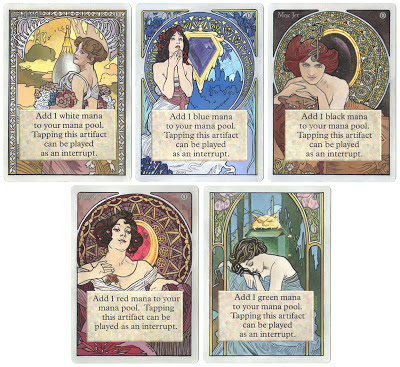 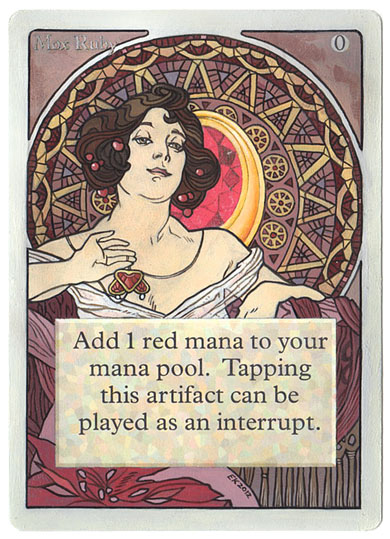 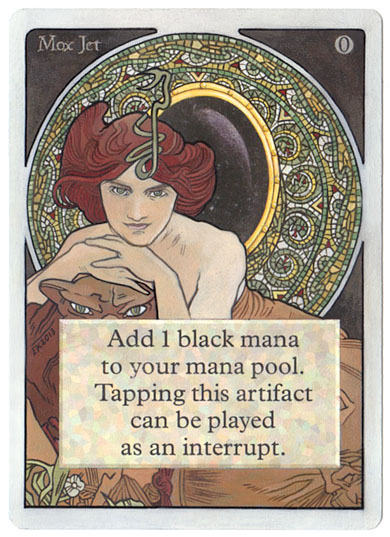 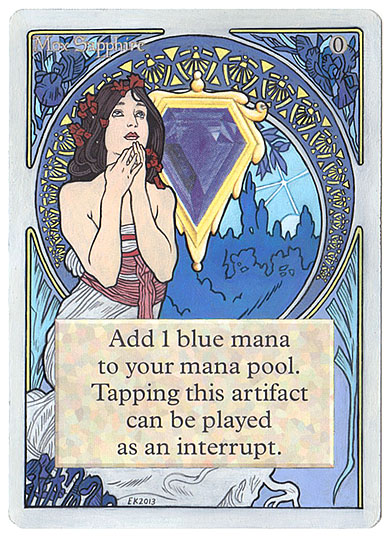 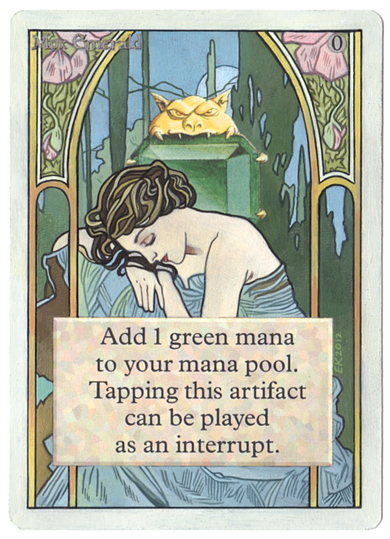 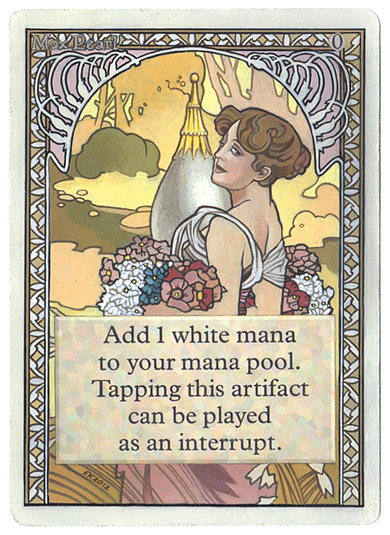 klugless
Eric is a freelance illustrator currently based out of Maryland. He finished his BFA at the Corcoran College of Art and Design in Washington, DC. Email him: eaklug at gmail. Follow him on Twitter: @klug_alters.